Magician, artist, asshole. Whatever term you may describe him as, Terry Gilliam still remains to this very day as one of the most influential filmmakers of the 21st century. Creating classics such as Time Bandits, and the audaciously praised Brazil, which similar to his latest film, went through a certain loop of production hell, his unique eye for crafting unique bizarre world with pessimistic dreamlike visions is what we would call his midas touch. With his latest release, The Man Who Killed Don Quixote, his fresh brand of humor, drama, and perfectly-timed horror, will certainly amuse fans and newcomers of his work alike. Nearly three decades in the making, Terry Gilliam has further proven that his strengths and weakness, can be stretched further than the limits.

What can easily be described as Gilliam’s best film from the 2010’s, The Man Who Killed Don Quixote plays precisely like a therapy piece. Referencing his career, with stark beautiful landscapes and impeccable production design, the film experiments with non-linear structure using these very vibrant images, to create a sense of Gilliam’s whimsy and personality being associated with the film’s content. With the two driven male leads, Toby and Javier (both brilliantly portrayed by Adam Driver and Jonathan Pryce), we see two different opposing sides of madness. Gilliam manipulates the two roles in order to reflect on his own experiences; his experience with dealing with production executives, and creating worthwhile projects. With both sides of madness presented in the film, we see one side of the spectrum lacking the need and inventiveness to create, and the other, the overabundance of ideas and experiences which clutter the mind’s identity. 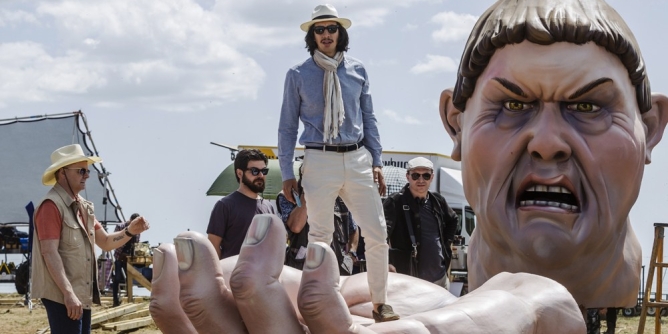 Like with all of Gilliam’s film’s, his unique touch comes with a cost. This isn’t uncommon for his films, although it’s already fact at this point that Terry has one hell of problem focusing. Either if it’s on plot, character arcs, or even consistency with world building, the large majority of his features feel scattered, for all the wrong reasons. The Man Who Killed Don Quixote is no exception to this problem. Relying a little too heavily on randomness as a basis for comedy, the end result of the piece just feels disjointed. One could make the argument, that said execution works in association with the film’s content. However, due the lack of any real direction, and the usage of self-referential humor as means to continue the plot, the film just becomes lazy and aimless, within its sea of genius ideas and morals.

By no means a bad film, Gilliam’s latest is an audacious masterwork of passion and the pursuit for the creative vision,  that’s currently desperately seeking it’s audience. While it’s disjointed nature, and abundance of directionless gags (which are still quite humorous, mind you) may turn off some viewers interested in exploring Gilliam’s filmography, The Man Who Killed Don Quixote still remains relevant, timeless, and just as epic compared with other Gilliam features.

The Man Who Killed Don Quixote Will Return To Select Cinemas, Dates TBA