Hear me out for a second. A Dog’s Way Home is one odd fucking trip. As weird as it may sound, A Dog’s Way Home may be one of the most strangest January releases we’ve had since A Dog’s Purpose. It’s a rambunctious film to say the least, one of barely any cohesiveness nor depth, that still managed to ooze it’s self-indulgent pores with familiar family film tropes and cliches. On the other hand, A Dog’s Way Home sort of grew on me, with each minute passing by. It’s a poorly scripted and directed film for sure, but the journey of Bella, the rambunctious pit bull, is just so extraordinary convoluted, that it almost feels like a grand adventure epic of sorts. 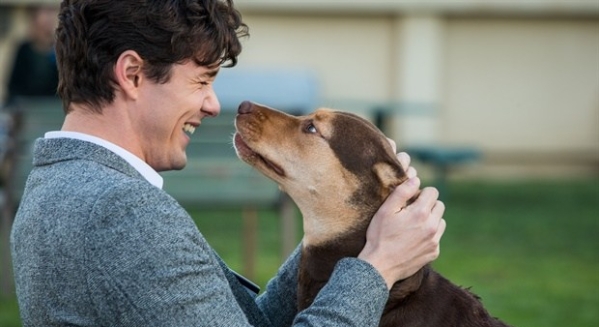 With lines such as “That’s like racism for dogs”, A Dog’s Way Home is certainly sporadic for all the wrong reasons. You thought the trailer spoiled to much? Well howdy, you’re in for something truly incredible to witness, including but not limited to the main dog Bella, raising and saving a baby cougar, and being abducted by a Homeless man, where Bella needs to stick with her abductor until his final dying words. Yeah, it’s that kind of movie.

In some way, A Dog’s Way Home may be the most emotionally scarring kids flick to come out in the last couple months. With scenes of death, abandonment, and abduction, this film is pure nightmare fuel for any young child who doesn’t understand how the world works yet. No wonder a five year old boy started tearing up, leaving the auditorium at my screening. The scariest part of all this? Kids might start feeding dogs cheese, and we all know how that’s going to turn out.

In another odd case of events, the film starts off with a shot of cats. Following this odd artistic decision, we get a taste of Bryce Dallas Howard’s voice acting, and as expected, it’s truly something else. High pitched one note audio recordings just doesn’t work well with adorable video footage of a young obedient pit bull. What follows is essentially a trip of oddly edited, contrived audio visual entertainment, where both sound and images clash together to create one 2019’s strangest films.

A Dog’s Way Home, is in no way a good film. However, it’s one hell of an entertaining one at that. Within it’s child scarring material, what most audiences will get from this film is a convoluted, annoyingly preformed, cuteness overloaded film that will test your limits, to reevaluate your choices for pass time entertainment. It’s stupid, contrived, film making that I shamelessly respect it for what it was trying to do. It’s not a ruff time folks if you see this one impaired!