I have a love it or hate it relationship with remakes. Most remakes we get nowadays are  dumbed down popcorn cash grab fluff to get butts in seats to produce millions, in order to repeat the hellish cycle all over again. However, sometimes remakes can improve on an original product, either adding a new perspective or stylistic take on a rather unknown tale. The best examples of these films are made by some of the most common and well-renowned directors, such as John Carpenter with his remake of The Thing From Another World, Martin Scorsese with his remake of Infernal Affairs, Brian De Palma with his remake of Scarface, and The Coen Brother with their remake of True Grit.

Recently, after viewing and adoring Peter Strickland’s In Fabric, I was motivated to check out some other famous Giallo flicks from the 70’s. I wasn’t very familiar with the work of Dario Argento, so I was relatively excited to see some of his films, outside of his most viewed and acclaimed piece Suspiria. So, a few nights ago, I decided to watch Deep Red, his 1975 cult horror classic. My reaction? I was genuinely confused by the product. From its rich color palette, all the way to it’s incredibly sexist sense of humor, Deep Red is simply one of the most scattered and over the top films I’ve seen from the 1970’s. This got me thinking. Because Suspiria managed to be remade by the one and only Luca Guadagnino, famed director of Call By Your Name and A Bigger Splash, could it be possible that Deep Red, a film which has an infamous past with international censor boards, could be remade in this day in age?

I kept on thinking about this even more. How would Deep Red be improved on in this age of toxic relations and aggression? After a few nights of seeing the film, I think I’ve got a couple of solid ideas to share. Here are my top 3 reasons why Argento’s cult classic Deep Red should be remade…

When finishing Deep Red for the first time, one of the many things that left me in bad taste was it’s antagonist reveal. Not only did the hereditary linked twist felt shoved in and overtly convoluted, there was no real build up to this grand finale, with an exception of the opening shot of the film. This is a huge problem in the grand scheme of things, especially when the film itself relies on a cheaply executed antagonist as it’s backbone. What I would have done, is that I would have kept the same familial hereditary concept, and went supernatural with it all. If we take a director like Strickland, or even Del Toro, they can easily create something horrifying with their unique sense of perspective. The most scary part of Deep Red was easily the scene with the “walking” childlike automaton. So why not dig deeper into the fantastical to improve the horror aspect of the film? If one could do this, not only would the film change completely, but the creative decisions would be more rewarding.

Although I do not blame for Argento and his cast and crew for this faulty mistake, the odd shifts between English and Italian felt incredibly noxious and annoying with each scene which went by. If you didn’t know already, parts of the original Italian audio recording was unfortunately lost, so the distributor and the cast and crew decided to record the missing bits in English, even though the original film was written and shot in Italian. Unsurprisingly, the result turned out to be even more frightening than the film itself. So, when remaking Deep Red, the biggest difference is just to keep the film in singular language. If one can do so, the overall consistency and annoyance level would surely lower for several picky audience members.

As much as I loved the the synth like structure of the original score for Deep Red, there’s plenty to improve on. For starters, the score never really fit with the film itself. The deep strings, and constant repetition became degrading after the first 10 minutes, making the film feel awfully contrived and endless. The solution? Rewrite and add more songs to the soundtrack, keep the inspired synths of the 1970’s, and throw out the repetitive chord progression and beats. This way, the musical score can perfectly conjoin with the tense horror of the film

I enjoyed the original Deep Red for the most part. Albeit it’s cringy attempts at humor, it’s disappointing antagonist, and awful dialogue, this film is in dire need of a makeover. And what better way to do so with a remake! All we need now is a talented director at it’s helm, and we can get the show on the road with this one!

If a Deep Red remake could be made in this day and age, who would you pick to direct the film? Tweet to us your response @OnTheClock6 and we’ll get back to you as soon as possible! 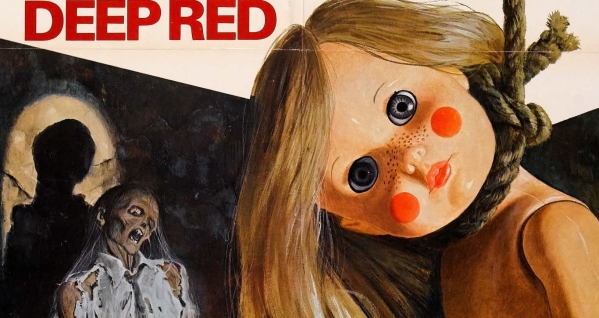