As leaving the Cineplex after Goosebumps-Haunted Halloween, with a disgruntled plastic bag with the remains of a snuck in Dorito package in hand, a mother and her child, who sat in front of me in the auditorium, went up to me and asked “Did you Like The Movie?” I responded with a simple “Yes. I had a lot of fun!” That was the end of the conversation. 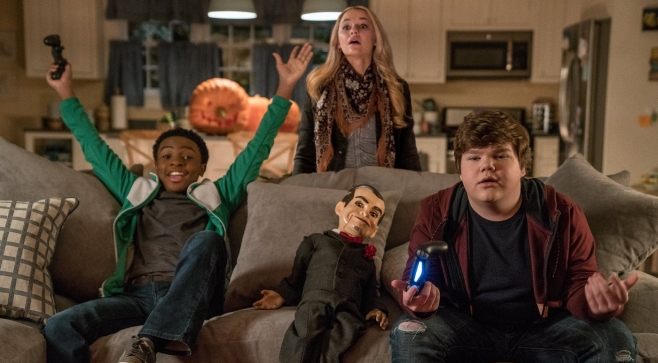 But you see, I fibbed. Goosebumps Two is yet another enslaved product of repetitive kid’s schlock that neither brings the joy nor relentless humor from the 2015 original. In no way is the original flick a masterpiece or anything. It’s flawed and occasionally very irritating and annoying to watch. However, compared with the sequel, things were cranked up to 11 in the worst way possible. I thought Halloween was supposed to be scary. Why does everything, including the cinematography, look like it came from a highly funded sitcom? Why is the humor so flat? Why do none of the characters have a personality whatsoever? Why does the fucking dummy have so many daddy issues? Did his Dad give him his stupid ass name?

Yet again, major studios are plaguing the film industry, whoopty frickin do. Goosebumps 2 is no exception. With what is most likely one of the most useless cameo appearances ever to put to cinema, and a 100% re-hashed plot from the original, I’m surprised that this isn’t getting all that much negative press. Sure, it’s not really all that fair for the cast and crew in the long term, when it comes to reputation and job credit, but compared with another Halloween kids flick which came out just a few weeks ago (The House With A Clock In Its Walls), this is just a pitiful cash grab in comparison. There’s no reason for this to exist except for the sole opportunity to milk a cash cow.

We as audience need to stop watching these types of movies. This Halloween, reconsider purchasing your ticket to this film, and save it for something else. There’s no need to see this on the big screen, or even see it at all. We fund cinema with our wallets, and if we keep on continuing to watch these films in theaters, there’s no escape from this demonic reality of capitalist hell. In conclusion, just go see a midnight screening of A Star Is Born on All Hallow’s Eve.