I have seen Gone Girl many time’s before and every single time I re-watch it, I still reconsider marriage for a good few minutes…..

Gone Girl is about Nick Dunne (Ben Affleck) and his glamorous wife Amy (Rosamund Pike) who presents a portrait of a blissful marriage to the public. However, when Amy goes missing on the couple’s fifth wedding anniversary, Nick becomes the prime suspect in her disappearance. The resulting police pressure and media frenzy cause the Dunnes’ image of a happy union to crumble, leading to tantalizing questions about who Nick and Amy truly are.

Let me just say that I didn’t really expect much before watching this when I saw this for the first time. I knew of all the talent involved and the premise seemed very interesting so I was expecting a decent flick. I went into this feeling pretty tired and hoping I made a good decision watching this at such a late time. I instead came out absolutely floored to the point where I sat there in silence as the credits rolled by. I wasn’t able to move. I was wowed by the 2 and a half hour runtime. Gone Girl is a brilliant masterpiece that is in my Top 10 of all time. 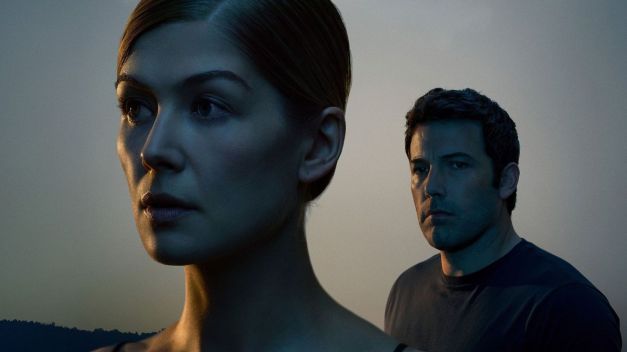 Like I said before, this movie revolves around a disappearance, and while that be what is seems at first, but when the plot thickens, it’s just so riveting. As the film goes on you slowly learn about the characters, one set-piece at a time. It’s a slow burn but it’s such an interesting movie that leaves you wanting for more answers. There is so many twists and turns that you may think one thing at the beginning but then think the exact opposite by the end. Add in the brilliant the foreshadowing, and you have a cinematic masterpiece.

Gone Girl is a film about disappearance and vengeance, but it also touches on relevant themes of today such as media coverage and relentless investigations. All of these themes are packed with substance that adds so much depth to the movie. Fincher manages to show how relentless and cruel the media can be when covering a story relating to disappearance. This film has changed my point of view of the media. It’s organic and realistic on how they cover rumors without much of a basis to begin with.

This also brings me to the characters who have so much depth. Every character in this film had a purpose to the story. You understand every motivation they have and you get to know them so much in such a dense runtime. There’s even a character who has one scene in the entire film which has more depth than most characters in standard feature-length drama’s. This brings me to the script written by the author of the book “Gillian Flynn”, who has written one of the best scripts of the 21st century. All of the dialogue is so well written and the way Flynn slowly reveals info is unparalleled. Flynn, in many scenes, is able to build tension with dialogue and build it up so well to the point that it has you shook, just by using simple dialogue and conversation exchanges. This is the best author to screenwriter work I’ve ever witnessed.

Not to mention director David Fincher, who manages to enhance everything with his direction. He takes a script that has many complicated elements and manages to bring it all to life with such slick and realistic direction that does not hold back for a single second. He frames shots in such a realistic way and blocks scenes pitch perfectly.  Fincher is a perfectionist and it shows with the way he directs this entire film.

The performances here are all so magnificent here. The whole ensemble that Fincher has brought together gives 110% into every scene they are in. First off is Ben Affleck who gives his single best performance I have ever seen out of him. He is so perfect for this role since Ben himself has gone through media scrutiny and has dealt with it in his entire career which is something that his character Nick Dunne is dealing with. He also gives such a subtle yet layered performance throughout which enhances what is on the page.

The biggest standout is Rosamund Pike who should have won best actress that year over Moore. Rosamund has such a crazy and complex character and she acts her ass off in which she manages to give such a layered and creepy performance that left me shook. Carrie Coon plays Nick’s twin sister in the film and for her very first ever movie, She gives such an incredible performance here that is complex yet subtle. Tyler Perry gives the most surprising performance here as I have never taken him seriously as an actor due to his Medea films, yet in this film, he is just so damn great. Tyler actually gives the films funniest moments and adds so much to what is otherwise such a depressing and hopeless film. Last but not least is Neil Patrick Harris who also really surprised me. Patrick Harris is iconic in the role of Barney Stinson on How I Met Your Mother, yet in this film, he completely loses himself in this role. Neil Patrick Harris has such a dark and repressed performance as a former lover to Amy, in which Neil nails the role.

The score by Trent Reznor and Atticus Ross is one of the best scores I have heard. There are so many unique sounds and instrument choices that you would not expect at all from a film with this kind of subject matter, yet it all works so brilliantly in the film. Many of the tracks are so beautiful yet haunting. The score really enhances everything happening on screen. The Cinematography by Jeff Cronenworth is also beautiful. The film has such a dark look that improves the mood of the film. Its use of colors and lighting is just so damn breathtaking.

In conclusion, Gone Girl is a film that just blew me away. In it’s 2 and a half hour runtime it manages to leave you invested the entire time and leaves you completely shocked and terrified by the end of the film. David Fincher has outdone himself as a director topping his work and managing to make his most mature film to date. I have seen this film multiple times already and it only seems to get better every time I re-watch it. I’m not afraid to call this a masterpiece.

View all posts by Hussain Alokaily